Government of the Virgin Islands of the United States

The VIDOH Vector Control Program (VCP) is focused on monitoring the Aedes aegypti mosquito that can spread dengue, Zika, and chikungunya and learning the best ways to control it. Since early 2017, the VCP has been doing routine mosquito surveillance to better understand mosquitoes in USVI. This surveillance helps program officials make the best decisions in trying to control this mosquito to prevent disease outbreaks and mitigate natural disasters.

What is a Vector?

A vector is the term used for an animal that can spread diseases. In USVI, the main vector for dengue, Zika, and chikungunya is the Aedes aegypti mosquito. Female Aedes aegypti mosquitoes spread these diseases from an infected person to an uninfected person through their bite. Male mosquitoes can't bite and feed only on nectar and other sugar sources from plants. Male mosquitoes can’t spread disease.

What is Dengue Fever?

Dengue fever is a disease spread through the bite of an infected female Aedes mosquito. The disease affects more than 400 million people worldwide each year. USVI is considered endemic for the disease, meaning dengue cases or a dengue outbreak can occur at any time. Symptoms are like a bad flu, including high fever, joint and muscle pain, pain around the eye area, and death. A severe rash can follow once the fever subsides. Find out more about dengue on the Centers for Disease Control and Prevention (CDC) website.

Zika is a disease spread mostly through the bite of an infected female Aedes mosquito. It can also be spread sexually from an infected person to an uninfected person. Zika’s symptoms are similar to dengue fever but also include redness of the eyes, called conjunctivitis. When a pregnant mother gets infected with Zika, the developing baby may also get infected and may be born with severe birth defects. Find out more about Zika by visiting the VIDOH Epidemiology web page or by visiting the CDC website.

Chikungunya is a disease spread through the bite of an infected female Aedes mosquito. The most common symptoms are fever and joint pain.  The joint pain may last for six months or more in some people. Learn more about chikungunya by visiting the CDC website.

How can I protect myself and my family from mosquito bites? 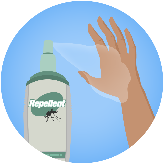 To protect yourself and your family from mosquito bites:

You Can Help with Mosquito Control!

Everyone Can Help with Mosquito Control! 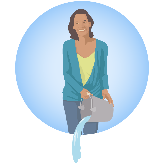 Mosquitoes can breed in as little as 2 tablespoons of water!  Even small containers that can collect water, like bottles, children’s toys, barrels, buckets, bucket lids, and overturned garbage can lids, can breed hundreds to thousands of mosquitoes.  This is another reason why it is so important not to litter!

Everyone can remove, reduce, and cover containers around their yards, homes, and businesses that hold water and can breed mosquitoes.  This is called source reduction.

Some ways to prevent and reduce mosquitoes around your yard are:

Read more on how to protect your home and property at https://www.cdc.gov/zika/pdfs/control_mosquitoes_chikv_denv_zika.pdf 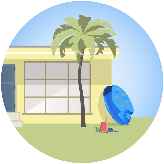 Adult Mosquito Surveillance
The VIDOH Vector Control Program (VCP) has been conducting routine mosquito surveillance since early 2017 to learn more about the Aedes aegypti mosquito that can spread dengue, Zika, and chikungunya. Surveillance is collecting these mosquitoes with traps around the territory. The amount of these mosquitoes collected over time shows us how the mosquito populations change by season and if control is working. This important information then allows VIDOH VCP personnel to make the best decisions in trying to control these mosquitoes should an outbreak or natural disaster occur.

Larval Mosquito Survey
The VIDOH Vector Control Program worked with Western Carolina University from 2019 to collect mosquito larvae throughout the territory and learn what mosquito species live in USVI. The last time this was done was in the 1960s, so it was very important to update this information. Through this larval mosquito survey, we have found that are about 18 species of mosquito in USVI.  We even found two mosquitoes that have never been found in USVI before, and one new species previously unknown to scientists!  Luckily, they are not known to spread diseases in the USVI.

For pictures and videos about what we’ve found, check out this Story Map.  Stay tuned for additional information and publications on what we’ve learned through this survey! 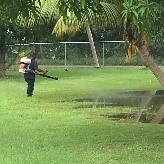 Backpack Spraying
During the Zika outbreak in 2016-2017, backpack spraying was used to help control Aedes aegypti mosquitoes around the territory. It was done by trained technicians who sprayed pesticides around homes, businesses, schools, and hospitals where permission was granted. The VIDOH Vector Control Program was not formed until the end of 2016, so a vector control company was contracted to do the backpack spraying in response to the Zika outbreak in 2016-2017.

In2Care® Mosquito Traps
The VIDOH Vector Control Program used the In2Care® Mosquito Trap in a USVI neighborhood in 2019 to see if it can control Aedes aegypti mosquitoes in our local environment. The results are being analyzed and will be posted when complete. Stay tuned for additional information!

The St. Croix Mosquito Project
This project has been discontinued as initially planned due to Covid-19.  For more information about the project  and why it was discontinued , follow the provided links.

In 2019, the VIDOH together with Western Carolina University and the Centers for Disease Control and Prevention (CDC) checked cisterns throughout the territory for mosquitoes and tested cistern water for germs that can cause disease. The survey found that mosquitoes were present in more than 4 out of 10 cisterns checked, and most of those mosquitoes were the Aedes aegypti mosquito that can spread dengue, Zika, and chikungunya.

To prevent mosquitoes from getting into your cistern, make sure the intake spout and overflow spout are screened with fine mesh with holes as small as window screens, and that the cistern cover is tight enough so that mosquitoes can’t get in.

Find out more about the 2019 cistern survey by visiting the Virgin Islands Department of Health Epidemiology page.

In 2021, VIDOH is working with the Puerto Rico Vector Control Unit (PRVCU) on the Mosquitoes in Cisterns Survey to learn if cisterns are an important breeding site for the Aedes aegypti mosquito that can spread dengue, Zika, and chikungunya. This survey will expand on what we learned from the 2019 cistern survey.  Stay tuned for additional information and publications on what we learn through this Mosquitoes in Cisterns Survey!

Questions, comments, or concerns? Contact us at the VIDOH Vector Control Program!

The Virgin Islands Department of Health (VIDOH) would like to inform the public about measures that it is currently taking in an attempt to reduce the population of Aedes aegypti mosquitoes on St. Croix. Aedes aegypti is the mosquito responsible for dengue, Zika, and chikungunya transmission. While VIDOH is not currently experiencing an outbreak, the VIDOH Vector Control Program (VCP) has the opportunity to be better prepared for future outbreaks by monitoring Aedes aegypti and determining the most effective Aedes aegypti control methods for the territory. The VIDOH is committed to protecting our community with effective tools to reduce the impact of mosquito-borne diseases including surveillance, outreach, pesticide applications and innovate tools.

The VIDOH is excited to announce that it is also actively planning an evaluation of Sterile Insect Technique (SIT) to reduce populations of Aedes aegypti. The project will consist of releasing non-biting, sterile male mosquitoes with Wolbachia, a naturally occurring bacterium that is found in most insects worldwide. When male mosquitoes with Wolbachia are released in neighborhoods and mate with wild Aedes aegypti female mosquitoes, the females’ eggs will not hatch, reducing the number of these mosquitoes over time. These mosquitoes are not genetically modified (GM). The VIDOH has never considered any GM mosquito control methods for use in the territory.

Director of the Territorial Public Health Laboratory, Dr. Brett Ellis, said in a statement that the VIDOH is ready to bring new technology that has the potential of making parts of the territory free of the disease-transmitting mosquito.

The project is made possible through a VIDOH-led collaboration with Verily, an Alphabet company, and other partners. It is currently in the regulation phase and community outreach and education about the project is scheduled to begin soon. The VIDOH VCP looks forward to a positive community collaboration and encourages the public to be on the alert for community meeting announcements, press releases and project information. Pending completion of the regulatory phase, the project may begin in early 2020. The public will be provided advance notice of community meetings and project initiation, along with other regular updates.

The public may see vector control personnel in many St. Croix neighborhoods for this and various other VIDOH VCP projects to increase our knowledge of the disease-carrying Aedes aegypti mosquito. Personnel will seek permission before entering property. Individuals with questions or concerns about mosquito-borne diseases or VIDOH VCP activities are invited to call the VIDOH Vector Control Program at (340) 690-9177 or send an email to dohvectorcontrol@usvi.onmicrosoft.com.

“Dengue, Zika, and chikungunya are mosquito-borne diseases that have caused severe outbreaks in the U.S. Virgin Islands and cause significant health and economic impact.  Can we reduce the number of potentially disease carrying mosquitoes by 80% or more, as has been done elsewhere, and without traditional pesticides or genetically modified mosquitoes!?! We believe we can, and I am very excited for the opportunity to evaluate the impact of this Sterile Insect Technique (SIT) with the group of experts that we have put together.” 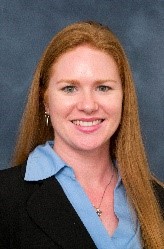 “Knowledge about mosquitoes in the USVI is very limited.  Since the end of 2016, when the VIDOH Vector Control Program was formed, we have been working to increase our knowledge of mosquitoes in the territory, especially about the Aedes aegypti mosquitoes that can spread dengue, Zika, and chikungunya.  We have learned a lot through a variety of projects, but still have a lot more to learn about these mosquitoes and the best ways to control them for our local environment and our community.”

Get the answers to Frequently Asked Questions!